“Every man dies, not every man really lives.” -William Ross

Today is the 90th day of our crusade.  A 1/4th of a year ago, Steve and I left the comfort of our small town and ventured into the unknown. When would we eat? Where would we sleep? Who would we meet and how would they become a part of our story? Could we actually ride our bicycles day after day after day for thousands of miles through treacherous conditons? Could we fight the bone-chilling cold, the ferocious wind, the scorching heat, the soaking rain, the frozen snow, and the relentless hills and mountains? Could we actually spend 24 hours a day  for 4 and a 1/2 months with another person? The biggest question was: are we stong enough? Through perserverance, tough decisions, confidence, brother-hood, and pure strength, we found answers for all our questions.

Utah is truly beautiful. It’s home to the most spectacuar scenery I’ve seen, yet. Mountain sized rock faces brightly colored orange, red, and beige tower all around us. The photos I take can never do it justice. We are ants in a big big world.

As we make our way along the winding road, prairie dogs run to their homes standing straight right like a soldier on duty. Never flinching. Though this has been the most delightful to-look-at state, it has also been the most energy obliterating. The hills never end & only seem to climb to the sky. The wind is relentless and has not let up since we arrived. Actually, that’s not true…the wind ceased while we slept. (pointlesss) 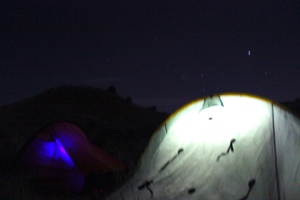 On March 31st, as we made our way to St George, we felt like salmon attempting to swim up river. The wind was more difficult than ever before. We slowly pushed our way through about 50 miles before pulled off to the side of the road and collapsed. Exhaling deeply, I laid back against the gravel and set my gaze to the bright blue sky. For a moment I thought about where we were. It felt surreal knowing that I got where I was all on my own mental and physical strength. No one was there to hold my hand. No one helped me or told me how to do it. Steve and I did it alone. Forced into independent adulthood. “Let’s bike another hour and find a campsite”, Steve suggested. I agreed. We biked that hour through tormenting gusts, until finally we saw what looked like a nice place to set up camp. Beside a small pond filled with anxious ducks that flew away as we neared, was a small grassy field. We set up our tents and decided to climb one of the rocky mountains. We slowly inched our way up loose rock and gravel. Carefully placing our hands and feet, we made it to the top. Eyes grew wide and jaws dropped as we peered across the landscape. This was my favorite camping site yet!

See our tents and bikes way down there?

Animal tracks imprinted into the stone. 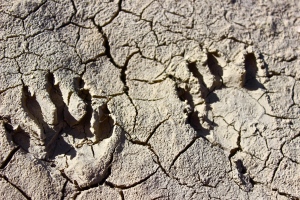 We were quite high up! 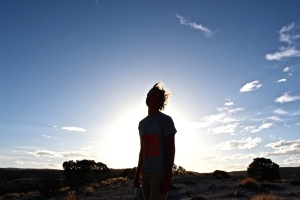 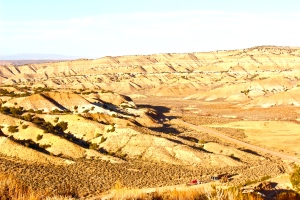 When we got back to our camp, we decided to build a fire and cook some rice and beans. It was our first hot meal while camping. It was succulent. 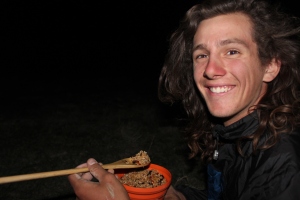 Following dinner, we laid back on our sleeping pads and did some star gazing. We laughed and reminisced about our trip up to this point. April 1st began lovely. The wind had calmed and the sun was shining brightly. However, this was just an an April fools joke on us. Right as we began to pedal, the sun disappeared behind the clouds and the wind returned. I had little water on me, so I created a schedule. I wouldn’t take a sip for the first ten miles, and then I would allow a drink every 3 miles following. This day will forever be in my memory as the most brutal riding I had done up to this point. After 18 miles of climbing straight up the side of a mountain with the wind forcing us back, we pulled over. We laid out our sleeping mats and pulled out our sleeping bags. We cocooned ourselves and took a break. It felt like we had gone 50 miles. As we laid there, we saw a white cloud coming fast toward us. The temperature dropped rapidly and then it came. A bitter blizzard.

We quickly packed all our gear and substituting socks for gloves we pressed SLOWLY onward. We faced the cold, the snow, and wind head on. As the snow flew into my eyes, I was blinded momentarily. 3 miles later, we took another break. We kept trudging until we hit about 23 miles up the mountain. We were only 4 miles from the summit of 9,000 + ft when a pick up truck passed by. It stopped and headed reverse toward us.  A truck full of greasy guys offered us a lift, and we decided it was the smart thing to do. The snow was coming down harder than ever. We threw our bikes in the bed of the truck along with ourselves. “This was one of the most insane experiences of my life”- Steve Kerr. I had to agree. We stood in the back of the truck climbing the mountain with ice crystals flying fast into our faces. I covered my face with my hat it became so painful. The truck flew up the mountain at an alarming rate. It was exhilarating and terrifying. Our way down the summit was the most horrifying. As the truck zipped down the curves and turns, we looked along the thin road and noticed we were above the tree line. One slip, and we would be off the mountain. It gives me the shivers just reflecting on that moment.

Finally, when we safely made it halfway down, the truck pulled over. After unloading the gear and passing out bracelets we were on our way again. The snow had subsided greatly. As we cruised down the mountain, I noticed my front wheel was acting “funky”. Turns out most of the spokes were loose…AGAIN. THIS WAS A NEW WHEEL!!! So, I guess it got damaged from being brutally loaded onto the bed of the pick up. We pulled over and Steve began digging for his spoke wrench, when a man pulled up to us. “You guys alright?”, he asked. We explained the situation and he offered to set us up in his yard for the night. He then offered to bring us to a bike shop in the morning. His name is Eric Allred. He is a kind and generous man. He raised a handful of boys and is now raising a 7 year old girl. We had fun chatting and hanging out.

Steve and I spent a lot of time in the garage for a  next to a warm fire. My partner in crime cooked us rice and spaghetti over the fire. When time came to sleep, the wind shook our tents violently and I got maybe an hour of sleep. It was brutally cold.

In the morning, Eric cooked us hash browns, eggs, and bacon. We also enjoyed some home made salsa and raspberry jam.

Now, I am off to the bike shop to see if we can’t get ourselves back on the windy road.

Thank you for reading!

“Don’t let fear stop you. If you do, you’ll never know what it’s like” -Eric Allred

Two young hooligans on a journey. View all posts by TrailingTheSun